St. Nicholas at Cathedral of Nativity of Mother of God 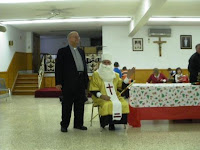 After being absent from the Cathedral for a few years, St. Nicholas once again found his way to visit the good children on December 6th. For a few weeks previous to his visit, there were rumours that St. Nicholas would be stopping by the Cathedral and parents and grandparents were urged to bring their children so they would not miss this occasion. And sure enough, as December 5th came, there was a lot of activity at the church and in the hall: the decorations were in place, the tables were set and the kitchen was in full swing. Following the liturgy, all gathered in the hall. The children were sitting at the back of the hall listening to a story about the Birth of Jesus, when all of a sudden, someone said that the children should start singing some Christmas carols. They had to sing nice and loud so that St. Nicholas would be able to hear them and stop by. After a few carols, St. Nicholas came down the stairs and headed for the group of children. He spoke to them, asked them if they had been good and whether they listened to their parents throughout the year. Having satisfied himself that they were indeed very good, he sat beside the Christmas tree and with the help of a couple of church elders, he handed out present that he brought. Each child picked up his/hers special gift and every child also received a goodie bag filled with chocolates, fruits and nuts – the traditional gift from St. Nicholas. Fr. Andrew must have been good because his name was also called and he received a special gift. St. Nicholas then patiently posed with the children as parents took pictures with this wonderfully caring Bishop who is also a great friend to children throughout the world. Since St. Nicholas had to deliver gifts to other children, he posed for one more group picture, then said good bye and headed out.
The children were then treated to hotdogs, French fries, chocolate milk and timbits. And since St. Nicholas Day is a special day for children, they were also able to make some Christmas crafts: some children created small gift boxes using last year’s Christmas cards, others coloured gingerbread boys and girls and others still made some Christmas wreaths from pipe cleaners and coloured beads. All in all, children were happy because they were able to see St. Nicholas and received gifts, parents and grandparents were happy because their families were in church together and Fr. Andrew was happy because he had so many people in church for the Feast of St. Nicholas.
Big thank you goes to members of Ladies’ Guild who decorated the hall, prepared gifts and prepared the luncheon for our children and parishioners. Also, thank you to the church elders for being St. Nicholas’ helpers. Thank you also to the parents and grandparents who brought the children and grandchildren to this occasion and a special thank you to Fr. Andrew for his special sermon for the Feast of St. Nicholas. It was wonderful to see all the smiling faces: not only the children but also the parents and grandparents. It is heart-warming to see that the tradition continues. 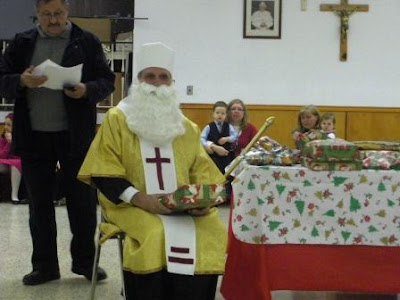 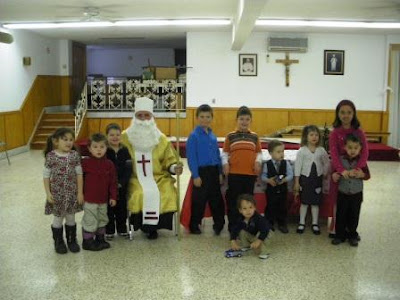