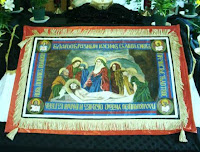 "The Noble Jospeh took down Your most pure body from the cross and, anointing it with fragrant spices, he wrapped it in a clean linen and put it in a new tomb." - Singing of this special ancient troparion filled the church of St. Michael in Windsor on Good Friday, April 18th 2003. Father Igor Zdravecky, pastor of the church, together with his faithful commemorated the death and the burial of our Lord, God and Savior, Jesus Christ. As we, Eastern Catholics keep saying - One can not divide the reality of the Cross from the reality of the Resurrection, and thus was everyone eagerly waiting for the morning of the Sunday to celebrate the victory of Life over the death. 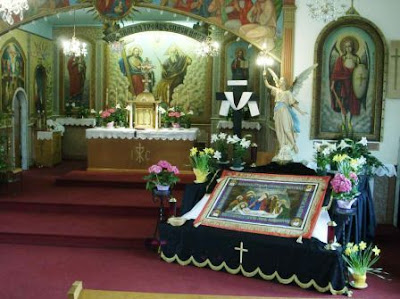 Bishop-Emeritus Michael Rusnak, C.Ss.R., First Eparch of the Slovak Byzantine Catholic Eparchy of SS. Cyril and Methodius, Most Reverend Michael Rusnak, C.Ss.R., was called to the Lord on January 16, 2003, after a long illness.
Bishop Michael was born on August 21, 1921 in Beaverdale, Pennsylvania, to Slovak immigrants, Andrej and Maria (nee Sotak). During the 1920’s economic depression in the US, his family returned to Slovakia. After attending high school, Michael Rusnak was accepted into the Redemptorist novitiate and made his religious profession as a Redemptorist in August of 1942. He pursued his philosophical and theological studies at the Theological Faculty of SS. Cyril & Methodius at the Slovak University of Bratislava and in Oboriste, Bohemia. On July 4, 1949, Michael Rusnak was ordained a Redemptorist priest in Presov, by the recently beatified Blessed Paul Gojdic, OSBM.
Soon after his ordination, Fr. Rusnak, C.Ss.R., was arrested and put into a concentration camp along with other Slovak Byzantine and Latin Rite Catholic priests who refused to collaborate with the Communist regime in Czechoslovakia. 14 months later, he was able to escape. Being an American citizen by birth, he obtained a passport from the US Embassy in Prague, and fled his homeland. After a short time recuperating in the US, he arrived in Canada in 1951. Fr. Michael Rusnak, C.Ss.R., was one of the first priests who left Slovakia due to religious persecution by Communists, and laid a new foundation for the Slovak Byzantine Catholic Church in Canada.
Together with Fr. Ludovit Minya, C.Ss.R., he established parishes in Toronto, Hamilton, Oshawa and Welland. In 1953, Fr. Rusnak, C.Ss.R., founded the Canadian Slovak Byzantine Catholic publication, “Maria”. He also published a collection of religious songs, “Chvalite Hospoda” – “Praise the Lord”.
In 1957, Fr. Rusnak, C.Ss.R., was named Dean of Slovak parishes of the Byzantine Rite in the Ukrainian Catholic Eparchy of Toronto. On October 7, 1964, Pope Paul VI appointed Fr. Michael Rusnak, C.Ss.R., Titular Bishop of the ancient Diocese of Cernik, Auxiliary Bishop to the Ukrainian Eparch of Toronto, and Apostolic Visitator for the Slovaks of the Byzantine Rite in Canada. Fr. Rusnak, C.Ss.R., was ordained Bishop on January 2, 1965, in St. Michael’s Cathedral, Toronto.
With the establishment of the first Slovak Byzantine Catholic Eparchy in North America by Pope John Paul II, - Eparchy of SS. Cyril and Methodius - Bishop Michael Rusnak, C.Ss.R., was enthroned as the First Eparch (Bishop) on February 28, 1981.
During Pope John Paul II’s visit to Canada, Bishop Michael was privileged to have the Holy Father visit the Slovak Cathedral of the Transfiguration in Markham and bless its cornerstone and plaques.
As member of the Canadian Conference of Catholic Bishops, Bishop Rusnak, C.Ss.R., served on the CCCB Ad Hoc Committee for Inter-ritual Discipline from 1968 until 1970 and was a member of CCCB Episcopal Commission for Christian Education from 1973 until 1983. At the Vatican, he was a member of the Congregation for Oriental Churches from 1968 until 1975 and a member of the Pontifical Commission for the Reform of the Oriental Code of Canon Law from 1973 until 1978.
Bishop Rusnak, C.Ss.R., kept close ties with his people. He served as a spiritual leader and advisor to various congregations and groups. Giving religious instructions to children, youth and adults, he always stressed the importance of understanding the meaning of Christ’s Church and one’s relationship with God, encouraging the fullness of Eastern Catholic spirituality.
Throughout his life, Bishop Rusnak, C.Ss.R., did not forget the church in Slovakia. In 1990, he was able to return to Slovakia for the first time in forty years. On February 17, 1990, he acted as a co-consecrator of the new Bishop of Presov, Jan Hirka. In 1992, he was present at the Episcopal ordination of Milan Chautur, C.Ss.R., as auxiliary Bishop of Presov.
Bishop Michael is survived by his sister Mary Katchmar and her family in Whiting, INDIANA, brother Nick and El Nora and their family in San Diego, CALIFORNIA, and numerous nieces and nephews in the United States.
VEČNÁ MU PAMIATKA - VIČNAJA PAMJAŤ - ETERNAL MEMORY

On Thursday, January 23, 2003, Bishop Michael’s remains were brought to his beloved Nativity of the Mother of God Slovak Byzantine Catholic Church in Toronto, the church that was home to Bishop Michael for so many of his years on earth. A Parastas service was led by His Grace, Metropolitan Michael Bzdel, C.Ss.R..accompanied by eparchial and visiting clergy. The church was filled with friends, young and old, many of whom had been with Bishop Michael right from the time that church had been started. Their voices, resounded throughout the church with the beautiful melodies of our Parastas service.
Following the service in the church, all were invited to the parish hall, where the ladies of the parish, prepared snacks, coffee and cakes.
A vigil was held at Bishop Michael’s side until 9pm, at which time, his remains were transferred to the Slovak Cathedral of the Transfiguration in Markham.
Bishop Michael’s body was received at the front door of the Cathedral by Bishop John Pazak, C.Ss.R., together with Fr. John Fetsco, C.Ss.R., Msgr. Andrej Sinal, S.Th.D. and Fr. Pavol Tomko, C.Ss.R. The vigil, which lasted until the Funeral Liturgy on Saturday, began after the Panachida.
On Friday evening, a Parastas service was celebrated at the Cathedral presided by Bishop Pazak, C.Ss.R., accompanied by Metropolitan Michael Bzdel, C.Ss.R., Metropolitan Basil Schott, OFM, Bishop Cornelius Pasichny, OSBM, Bishop Severian Yakymyshyn, OSBM, Bishop John Kudrick, visiting Roman Catholic bishops, and eparchial and visiting clergy. Following the Parastas, the vigil continued with Bishop Michael’s nephews, nieces and niece-in-law taking turns throughout the night.
Early Saturday morning, the church started filling with parishioners from the parishes in the Eparchy. They came from Hamilton, Toronto, Oshawa, Welland, Windsor, Markham and Montreal. The Funeral Divine Liturgy was celebrated by Bishop John Pazak, C.Ss.R, and the Eastern Catholic Archbishops and Bishops from the previous evening, in the presence of His Eminence, Aloysius Cardinal Ambrozic, Archbishop of Toronto. Bishops Clune and Lacey from Archdiocese of Toronto, and Rt. Reverened Arthur Brown, representing the Anglican Archbishop of Toronto, were also present. Representing the Embassy of the Slovak Republic in Ottawa was Dr. Rastislav Puchala with his wife. From the Town of Markham, Mr. Frank Scarpitti, deputy mayor, and Councillor Joseph Virgillio were present. Also in attendance were Mr. John Stephens, honorary consul of Slovak Republic, with his wife, and Dr. Mark Stolarik, President of Canadian Slovak League, and his wife.
At the conclusion of the Funeral Liturgy, all were invited to a memorial meal for Bishop Michael, in the Cathedral hall. Interment took place at Holy Cross Cemetery in Thornhill, following the meal.
Mary Siroky - Snell Posted by Daniel at 6:35 AM No comments:
Newer Posts Older Posts Home
Subscribe to: Posts (Atom)