Sunday after the Feast of the Dormition of the Theotokos is in our Eparchy always celebrated with great joy at splendid shrine in Hamilton. This church is famous for its odpusts in honor of the weeping icon of Our Lady of Klokočov.
Shrine was built during the tenure of late pastor Rt. Reverend Mitred Archpriest Francis Fuga, who came to Canada in 1954 and immediately started his zealous ministry among our faithful. He passed away in 1987
Iconography of the church was designed and performed by Russian iconographer Igor Suchacev, who needed fourteen years between 1970 and 1984.
Main celebrant of the 2007 odpust was His Grace, bishop John (Pazak), who was assisted at the altar by fathers: Fetsco, Mucha, Dolinsky, Girhiny, Vavrak, Comeau, Williams, Vano (Slovak Roman Catholic from Hamilton) and visiting seminarian from Slovakia.

After the liturgy was the traditional banquet in the hall under the church, where everyone had opportunity to socialize with all our sisters and brother in faith. We are looking forward for next odpust! Posted by Daniel at 5:19 AM No comments:

Feast of the Transfiguration is one of the greatest feasts in our church calendar. On August 6th 2007, bishop Pazak came to pray with his people in downtown Toronto at Shaw Street. He was accompanied at the altar by Fr. Pavol Dolinsky, pastor and Fr. Fetsco, former apostolic administrator of our Eparchy.

After the ambon prayer was the traditional blessing of fruits, which people brought with them to be blessed. This is nice custom, still kept by our faithful throughout the Eparchy. 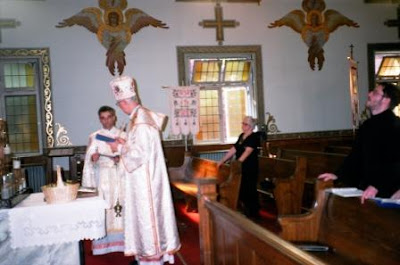 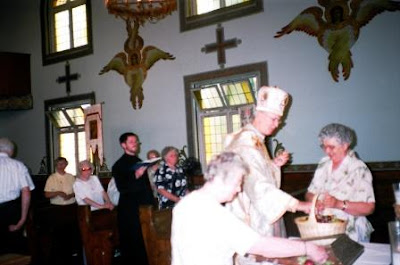 Posted by Daniel at 9:14 AM No comments:
Newer Posts Older Posts Home
Subscribe to: Posts (Atom)