Two weeks after chanting the litany for the pope during his Canadian visit, Fr. Deacon George Bubanko was ordained a priest by Bishop Michael (Rusnak). The ordination took place during the 11.00 AM liturgy at Shaw Street that also celebrated the upcoming Feast of the Holy Protection. Fr. George is a native of Port Colbourne, ON, and belonged to the Holy Spirit parish in Welland. He is the son of George Bubanko, originally from Croatia and Helen Mary Marko, originally from Beloveza in Slovakia. After preliminary studies in Canada, he was sent by Bishop Michael in 1981 to Rome, where he studied theology at the University of St. Thomas Aquinas - Angelicum. June 5th, 1983, Bishop Michael ordained him a subdeacon, and May 13th, in the chapel of the college of St. Josaphat in Rome, a deacon. During the Great Entrance Fr. George carried a liturgical veil over his head, representing himself as an offering to God. At the end of the liturgy everyone from the congregation was able to approach him and received for the first time his priestly blessing. A festive banquet with cultural programme followed the liturgy in the hall underneath the church. 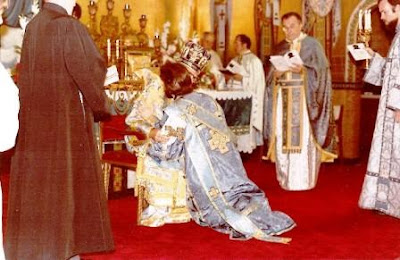 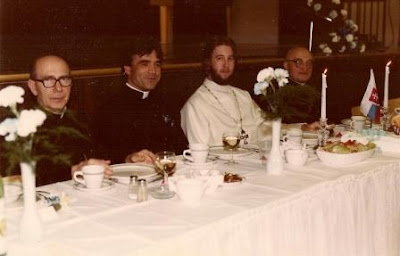 More photos available at:
http://picasaweb.google.sk/danielprorok/1984_09_30OrdinationOfFrGeorgeBubanko#
Posted by Daniel at 9:00 PM