A special day in Windsor at St. Michael's Byzantine church 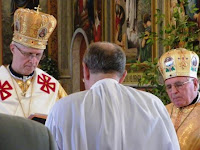 Most of you know that in our churches we have annual pilgrimages – odpusts. We have one in August (Hamilton), one in September (Toronto), one in October (Oshawa) and our last one in November (Windsor). We try to attend all of them however the last one always gives us worries and we hold off responding until the latest time possible: what is the weather going to be like that first November Sunday? Will the snow hold off until after that? Will there be fog in London area? Maybe it was because this particular odpust in Windsor was a very special day indeed that the sun was up early in the morning and the drive to Windsor was absolutely beautiful.
The odpust itself is a special day for every parish and for Windsor this one was exceptionally special: it was on this day that Winsen Zouzal, son of the late Very Rev. Anthony Zouzal and Mrs. Mary Zouzal took the first step in becoming a Deacon. This day he received the Minor Orders – the Tonsuring (lector, cantor and candlebearer) and the Subdeaconate.
Parishioners started arriving early and everyone was looking forward to the liturgy. Just before 3pm, the procession entered the church. Right behind the crossbearer, Winsen himself led the procession followed by Rt. Rev. Eugene Halitsky, Fr. Peter Hrycyk, Fr. Ron Comeau, Fr. Albert Sandor, OFMCap & Fr. Phillip Naessens, OFMCap - friends of Winsen Zouzal and family. At the end of the procession, H.E. Bishop John Pazak, C.Ss.R. walked in, bestowing blessings upon parishioners and guests. Fr. Jozef Mucha later joined the clergy at the altar.
First part of the celebration was the actual ordination into the lectorate and subdeaconate: the candidate receives a candle, professes his faith, pledges his obedience to the Bishop and to the church, receives his Epistle book, and finally receives the proper vestments - stikhar with orarion. If you have ever seen a priestly ordination, this is a scaled down version of it. It was a beautiful ceremony witnessed by Winsen’s mom Mrs. Mary Zouzal, Winsen’s wife Susan and their children along with Winsen’s brothers Tony and Karl and their families as well as parishioners and guests. Winsen’s mom was very emotional during the entire ordination and you could tell that she was also a very proud mother of a future deacon. This was also emotional for most of the parishioners and guests who have known the family and who also knew that Winsen’s late father, Very Rev. Anthony Zouzal, served in this church all his priestly life. Winsen grew up in this very church where on this day, he entered into the Deaconate! Indeed a very proud moment for us all. With a lot of hard work on Winsen’s part, and prayers from us all, we may have a continuation of this celebration next year.
Liturgy followed the ordination with a homily from Bishop John. It concluded with mirovanije – blessing with holy oil by Bishop John and all were invited to the banquet in the hall below.
After the introduction of the head table, there were congratulatory letters from Fr. Sipek, former pastor of St. Michael’s and also from Fr. Jaroslav Lajciak and Daniel Cerny, SEOLic, in Rome. Fr. Jaroslav served the parish this past summer and Daniel visited the parishioners in Windsor to gather information for his thesis. Both have come to know Winsen and his family while in Canada. Bishop John blessed the food and everyone enjoyed a wonderful dinner. There were many prizes for winning and it was just after the dinner that Winsen’s mom congratulated her son on this occasion and presented him with a cake. She spoke like a proud mom that she is, from her heart. She thanked all for coming to celebrate this special day with her son and the family and asked that everyone have a piece of the cake.
Winsen also spoke a bit: emotional as he was, he thanked the Holy Spirit for gently guiding him to this day and to his new “position” in church, he also thanked Bishop John for helping him and he promised to serve faithfully and to the best of his ability. He also urged the people to bring their families back to the church, to renew their faith and to be a part of the parish. He said that he “felt” his father was with him since the chalice that was used for communion was his father’s chalice. He knew his father was proud of him and was very much a part of this celebration. He thanked his wife and his family for supporting him and he thanked all for coming to the odpust.
This day could not have been any better: the drive home was excellent and we can only hope that next year’s weather will be just as nice as this year and, God willing, we will be back. 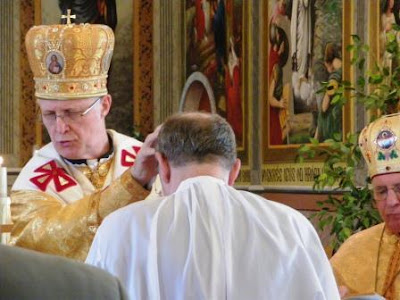 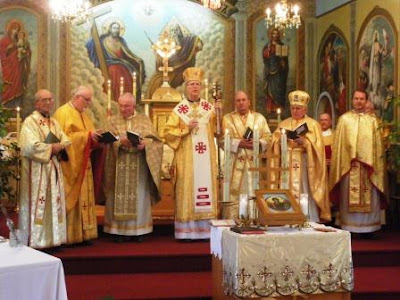