St. Nicholas at the Cathedral of the Nativity of Mother of God (Toronto) 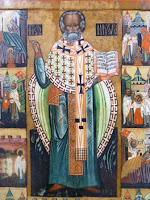 December is the month of many holy days: Christmas, St. Stephen, St. Mary, and of course, the most popular one for children: St. Nicholas. He is also known as Nicholas the Wonderworker. He had a reputation for secret gift-giving, such as putting coins in the shoes of those who left them out for him. Historical Saint Nicholas is remembered and revered among Catholic and Orthodox Christians. He was the only son of wealthy Christian parents. He was very religious from an early age and according to legend, Nicholas was said to have rigorously observed the canonical fasts of Wednesdays and Fridays. His wealthy parents died in an epidemic while Nicholas was still young and he was raised by his uncle—also named Nicholas—who was the bishop of Patara.

In Slovakia, Mikuláš, is often also accompanied by an angel who acts as a counterweight to the ominous devil . Additionally, children find candy and small gifts in their shoes the evening of December 5th or the morning of December 6th.

The children of our parish must have been pretty good all year round because on Sunday, December 4th, following the 9am liturgy, St. Nicholas arrived at our church. Children were gathered in the hall prior to that working on crafts, colouring and cutting out images. As soon as they heard the bells, they started singing some Christmas carols and their eyes sparkled when they saw the man, dressed in his Bishop vestments coming down the hall towards them. As soon as he settled in his chair, children began to gather around him and St. Nicholas, with the help of the parish president, Mike Kapitan, began distributing presents. Every child was called to sit on his knee, had a few words with St. Nicholas and received a bag of candies, fruits and nuts as well as a gift selected specifically for them. All the children were delighted with their gifts and the ladies had a hard time getting them to stop playing long enough to have a lunch: hotdogs and french fries as well as donuts and hot chocolate.

Thank you to Fr. Andrew for encouragement, the parish for supplying the gifts, the generosity of Mr. & Mrs. Michalik for their donation to St. Nicholas party and to the ladies for preparing the luncheon for the children. We can’t wait for next year to see if St. Nicholas will find his way back to our church and to see if our children will behave throughout the year. 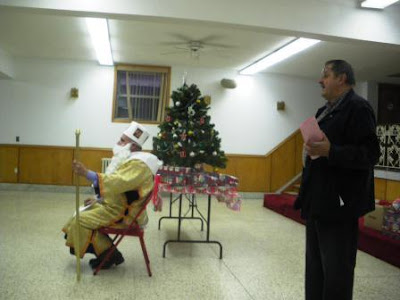 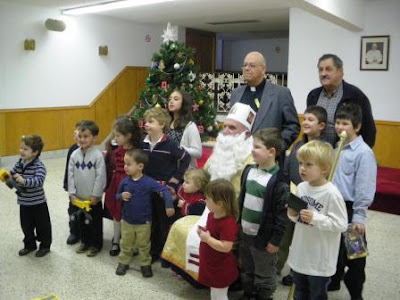